Impact of BT on Lincolnshire’s economy 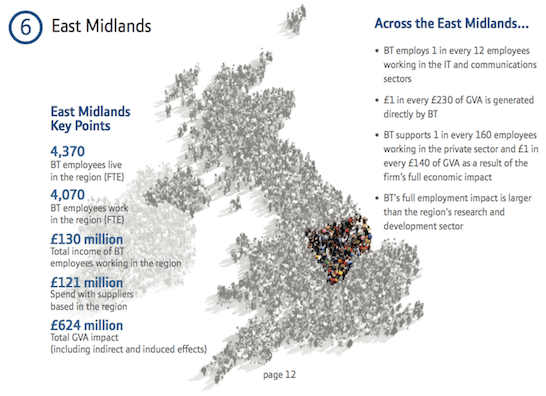 Communications company responsible for more than 8,000 jobs across the East Midlands – including more than 1,000 in Lincolnshire

BT generated a massive £82 million for the Lincolnshire economy in the past year, according to an independent report published today.

The report, by Regeneris Consulting, also shows that the communications company supports more than 8,000 jobs in the East Midlands – of which more than 1,000 are in Lincolnshire – through direct employment, its spending with contractors and suppliers and the spending of employees.

In employment terms, BT’s impact in 2014-15 was larger than the region’s research and development sector. Around £121 million was spent with regional suppliers.

The overall beneficial financial impact of BT activities is expressed as a “Gross Value Added” (GVA)* contribution. For the East Midlands the BT GVA totalled £624 million – equivalent to £1 in every £140of the region’s total GVA – of which £82 million was in Lincolnshire.

Tim Fanning, associate director at Regeneris Consulting, said: “Our analysis confirms the sheer scale and reach of BT’s ongoing economic contribution to the East Midlands and the UK as a whole.

“BT makes a contribution to every community across the UK. At the UK level, £1 in every £80 of wealth created is attributable to BT – this is one of the single largest contributions to the UK economy by any firm.”

Owen Moody, BT’s regional director for the East Midlands, said: “There are few organisations in the East Midlands that have a larger impact on the day-to-day life and future prospects of the region than BT.

“We are one of the region’s largest private sector employers and investors – our investment in fibre broadband in the East Midlands alone amounts to hundreds of millions of pounds – and the services that we provide are a vital part of every community.

“The facts and figures shown in this report highlight the full extent of BT’s contribution to the local economy as we go about the daily business of keeping people connected and introducing new technologies, which are creating fresh opportunities and transforming lives.

“Aside from the company’s activities, the report also draws attention to the positive ways BT people are contributing to the communities where they live and work, whether they are a volunteer for a worthy cause or a local shopper.”

‘Social Study 2015 – The Economic Impact of BT in the United Kingdom’ analyses the key role BT people play in economic, business and community life across the English regions, Scotland, Wales and Northern Ireland.

It highlights the positive contributions made by BT through the salaries and wages of employees and contractors, and the beneficial impact of its procurement and overall expenditure around the UK.

The report highlights that BT in the East Midlands:

its own commercial programme and by working with the Government and local authorities in broadband partnerships to extend next generation broadband even more widely – especially to more rural and remote communities.

In the East Midlands, BT is the major private sector partner in broadband partnerships in Derbyshire, Leicestershire, Lincolnshire, Nottinghamshire, Northamptonshire and Rutland. Through these partnerships and the company’s commercial roll-out, BT has already made fibre broadband available to more than 1.7 million homes and businesses across the East Midlands – and this number is continuing to grow rapidly.

The report also highlights how BT is consistently one of the country’s leading investors in innovation with spending on research and development in the 2014/15 financial year reaching £502 million. Among the latest developments, the company has started trials of ultrafast G.fast broadband, which is already delivering download speeds up to 330 megabits per second (Mbps).

This new technology will be rolled out to 10 million UK homes and businesses by the end of 2020 and the majority of premises within a decade.

Volunteering is also a core element of BT’s strategy. Last year, BT people in the East Midlands contributed more than 2,000 volunteering days to worthy causes, amounting to in- kind support of nearly £670,000. Across the UK, the figure is 50,500 days, worth more than £15 million.

In addition, MyDonate – BT’s commission-free online fund-raising service – has helped to raise more than £1.1m for charities across the East Midlands.

Owen Moody added: “It’s evident BT people throughout the East Midlands really want to make a positive contribution to the communities in which they live and work. Every day BT employees help millions of people to communicate, do business, be entertained and stay informed.”

UK-wide, BT’s total GVA contribution is assessed at £18 billion. The company supports 217,000 jobs directly and indirectly and last year spent £6.5 billion with UK-based suppliers. As a result of the full economic impact of BT, the firm supports £1 in every £80 of GVA in the UK economy and one in every 110 UK employees.

The full report is available at www.bt.com/reports 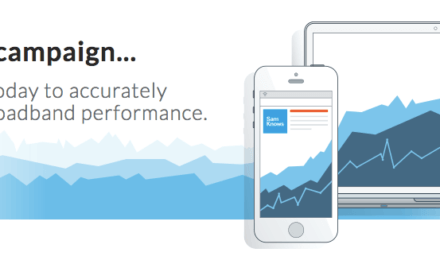 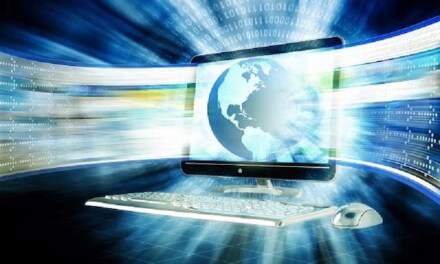 Can you get superfast broadband? Here’s how to find out

Download the wifi checker app to check your broadband